I’m not what you might call a “sporty” person.  My parents kept me fairly active as a child by enrolling me in a variety of activities.  I participated in figure skating and gymnastics for periods during my youth. I had an even longer commitment to dance, which I did for ten years (seven of which were competitive). I did swimming lessons throughout my childhood, leading to a position as a lifeguard and swimming instructor during my high school and undergraduate years.

Alas, I’ve become progressively more and more slovenly as an adult. My general attitude towards fitness and physical activity can best be summed up by beautiful tropical fish Ann Perkins from Parks and Recreation: “Jogging is the worst, Chris! I mean, I know it keeps you healthy but God at what cost?” For most of my adult life I haven’t had the kind of active hobbies that people proudly display on their resumes and Facebook profile pages: “Rebecca enjoys surfing, skiing, and long walks on the beach” “Todd likes to fish, golf, rock climb, mountain bike, and hike”  (whoa, slow your roll Todd). By contrast, “Meg enjoys settling down into her couch groove  to inhale brie and drink wine coolers from a hurricane glass while reading, watching TV and movies, or dicking around on the Internet!” What I like to deem my “fancy pants” activities – going to the opera, ballet, and theatre – tend to involve a lot of butt-to-chair action too. I even manage to make visiting museum and art galleries a sedentary past time (I can appreciate that sculpture perfectly well from this bench, thank you very much). In sum, I take the phrase “down time” quite literally.

Now, I don’t think there’s anything wrong with having sedentary hobbies. I think appreciating film, television, books, video games, or any other couch potato-related activity is a valid way to spend some of your time if it brings you happiness! But I felt the need to add some variety to my life, to bring a greater sense of balance to my leisure time so that it wasn’t all sloth-like. I didn’t want my Sims to have more fulfilling and interesting hobbies than I did. I started my efforts towards having non-couch-related hobbies by revisiting one of my favourite activities of my childhood, dance. This time instead of the barre I picked up some heels and got into the ballroom by taking up salsa and bachata dancing. I took it up with one of my best friends, and it’s been a fun way to be a bit more social and active these last couple of years. Salsa has been a casual flirtation, though, compared to the passionate love affair I embarked on last year with a sport that’s been getting a lot of media attention lately (including this weekend’s release of Catching Fire): archery. 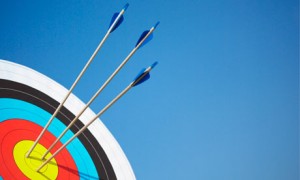 It’s been a big couple of years for archery in the media, with films like Brave, The Avengers, and, most notably, The Hunger Games franchise spotlighting bow-and-arrow wielding leads. I wouldn’t say that it was archery’s pop culture ubiquity that inspired me to take up the sport, though undoubtedly it played a role in getting it on my radar. I wasn’t deliberately looking to become Katniss Everdeen; it was more a happy accident that I was perusing the website for Casa Loma, an historic manor house here in Toronto, and noticed that they were offering beginner archery lessons. I signed up my husband and I for a date night session and we were both hooked immediately. It wasn’t too long before we were purchasing our own equipment, and we continue to take coaching lessons once a week in between shooting at a free public range (weather permitting, damn Canada).

Archery has a lot of appeal, especially to someone like me who isn’t into sports in general. It allows me to engage in a sport that is physically and mentally challenging without making me want to curl up in an out-of-breath, sweaty ball on the floor and die. As well, it offers the kind of challenge that really works for me, in that I’m a very detail-oriented person and it is a sport of minutiae and precision. Every little tweak of your body can have a massive effect on your shot. There is a lot of measurable progress and a great sense of individual achievement that I find intensely satisfying.

It also draws a diverse crowd of participants. Sure, there are the serious athletic types (otherwise known as “jerks” – I’m kidding! Kind of), but the archery crowd also consists of a wide range of body types and age groups, from children as young as eight or nine to seniors. There are casual, family-oriented groups and Ron Swanson man-in-the-wilderness types. One of the largest crowds I’ve come across, and one I generally gravitate to as “my people”, are the nerds and geeks. There are crafty nerds who customize their bow and make their own equipment. Unsurprisingly, there are a lot of history nerds getting their medieval on. There are tons of pop culture geeks involved with the sport too, and it’s not uncommon to hear debates on Doctor Who or Game of Thrones in between ends at the range. My husband and I are board gamers (of the kind found on Board Game Geek rather than, say, the Monopoly variety), and we’ve been able to meet a lot of like-minded individuals through archery (thus somewhat solving my ongoing dilemma of how does one exactly make friends as an adult once you’ve left the confines of the classroom? And they say dating is hard).

The sport has its downsides, of course. It’s not a cheap activity to get into, and because it’s still somewhat of a “niche” sport you can’t just walk into a sporting goods store anywhere and pick up what you need (we usually buy our stuff online from a store in the U.K.). Despite its growing popularity there still aren’t a lot of places to go shoot, especially in the winter. I’ve had my ups and downs with my own performance.  It can be as frustrating as it is satisfying, and not without its physical ramifications – I’ve had the grapefruit-sized bruises on my arm to prove it. But the rewards infinitely make up for any detractions. And, you know, I haven’t even taken into account the cool factor. There is totally a cool factor. I’ve gotten so many comments on the subway or at work when I lug my archery bag around. Usually along the lines of, “Oh, is that tennis equipment?” “No, it’s my archery gear” “OH MY GOD ARCHERY?!? SCREW TENNIS, THAT’S SO MUCH COOLER!”

I’ll probably always be a couch potato. It’s very unlikely that, given the choice, I’d choose going for a run over watching MasterChef Junior. But I like that my hobbies are a bit more well-rounded now. I like that I can say that I participate in an Olympic sport (suck it, golfers), one that has increased my zombie apocalypse preparedness quite substantially. And while I’m watching Catching Fire this afternoon, I’ll be reviewing Katniss’ archery technique just as much as I’ll be considering the adaptation choices (girl, how do you expect to murder your colleagues if you aren’t making sure you are consistently hitting your anchor point?).