It’s been hotter than blazes this week, despite the fact it’s November.  This Wednesday, I was pleasantly surprised to receive the email update from Community Seafood letting us know our fish share would be Albacore Tuna.  I couldn’t wait to try a new product and new preparation, and I was immediately enticed to do a seared tuna since the fish would be sashimi grade.  The Community Seafood newsletters have been hit or miss for me, but I liked the simplicity of the recipe inspired by one from Rodelio Aglibot, and I thought the dish would be perfect for an evening of hot Santa Ana winds.

After picking up the fish, I declared to my partner that I hated all of humanity (it was one of those days at work), so he jokingly asked me if I was ready to brave Whole Foods for the rest of our  ingredients.  I loathe grocery shopping during the best of times, but last night’s post-work dinnertime rush wasn’t so awful, after all.  Prep work at home was quick, and soon I was sitting down to one of the tastiest dinners we’ve made in a long time. 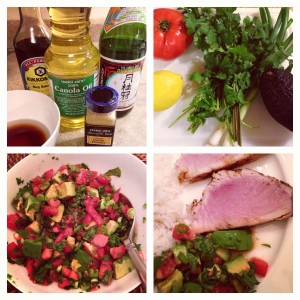 from prep to plate 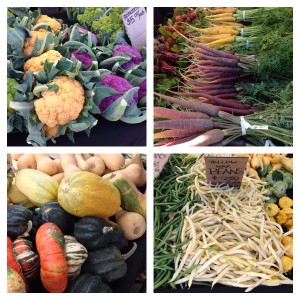